Understanding the Ecology of Calcutta | Prepare for future cyclones

Calcutta, an old city with a warm heart, is left devastated by the Super Cyclone Amphan. It was painful to see thousands of trees uprooted from the ground. Many bustees were ripped apart. Wires were lying around. Streets were flooded with water.

As there are many groups, NGO's working on the ground to rebuild Kolkata - this blog is to put the perspective of the larger global phenomenon which needs to be addressed.

Every year we are hit by multiple massive cyclones. We need to be prepared and understand the risks which lie ahead.

We have to take a step back and examine the ecology of Kolkata. The world is changing and there are many factors which need to be considered before we rebuild the city.

Cyclones are low-pressure systems that form over warm tropical waters, with gale-force winds near the centre. By absorbing some of the force of wind and waves and serving as a flood barrier, mangroves can lessen the damage caused by cyclones and other storms.

The East Calcutta Wetlands are a complex of natural and human-made wetlands lying east of the city. The wetlands cover 125 square kilometres and include salt marshes and salt meadows, as well as sewage farms and settling ponds. The wetlands are used to treat Kolkata's sewage, and the nutrients contained in the wastewater sustain fish farms and agriculture.

The Wetland is considered the largest natural treatment system for solid and soluble waste and is a Ramsar site (Wetlands of International Importance). Yet, despite low oxygen concentrations, wetlands are among the most biologically productive ecosystems on the landscape.

The wetlands help balance the water table in Kolkata. The city's excess water drains out to the marshes. Reduces the risk of flooding.

Additionally, East Kolkata Wetlands claims the unique distinction of being the largest “wastewater-fed aquaculture system” in the world where the sewage is recycled for pisciculture and agriculture.

1. Rise of sea-level leading to submerging of Sundarbans

However, with the current rate of Global Warming, we are expecting cyclones to become stronger. The latest science suggests the country is set to face a rise in flooding, erratic rainfall and storms as the planet heats at a record pace. Scientists project that under a high emissions scenario, relative sea-level rise is likely to inundate most of the Sundarbans by mid-century, and could wipe them out by the end of the century.

2. Toxic drain off from the Ganga River System adding to dwindling of Sundarbans.

Ganga - River system has been abused for so many decades that it has begun to spit out toxic chemicals. All the leather, textile, chemical factories drain out their pollutant without any treatment. This causes the fragile ecosystem of the wetlands to collapse.

The river which starts off crystal blue ends like black muck. Regional politics and corporate corruption makes it difficult to monitor.

Groaning under the weight of encroachments, the rapidly shrinking East Kolkata Wetlands is under threat. "About two-and-a-half decades ago there were around 8,700 water bodies in Kolkata. Now there are 5,000. So nearly half have been lost, mostly due to urbanisation," environmentalist and author Mohit Ray.

The Government has two challenges that it needs to address on priority. The first is to overcome the issue of a lack of funds to rebuild the state's economy. The second and more pressing is to provide shelter to and restore the livelihoods of the survivors of the cyclone.

Bengal landscape is filled with ponds. As the land is low these ponds help maintain the water table. As a result, water collects in these ponds whenever it rains.

Calcutta had many ponds, like names 'Sealdah' which literally means fox lake. Many neighbourhoods still hold their old names like Paddapukkur, Benia Pukur however the pond does not exist anymore. This makes Calcutta more prone to flooding. 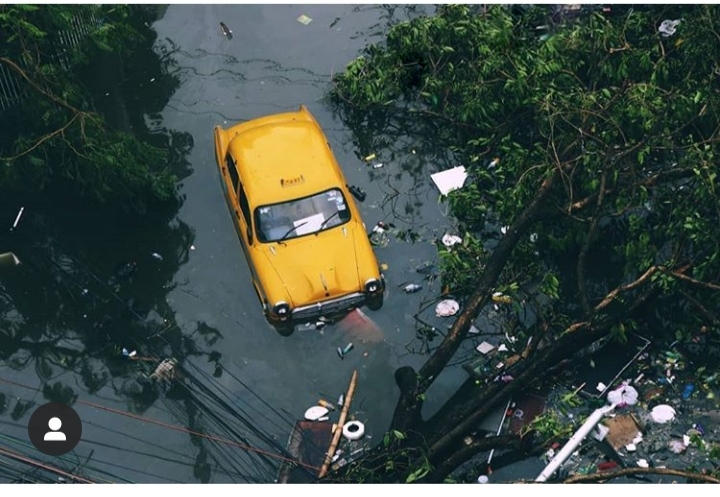 Citizen Awareness is key to our future. We are in a state of Climate Crisis.

Calcutta is an ecologically sensitive city. We have to come together to protect it.

Let's use our heads, hands and heart - before it's too late.

Let us raise the consciousness.

The article was written for Emaho Network. A Kolkata based forum to extend community support.

Carbon Brief: Global warming has ‘changed’ spread of tropical cyclones around the world

Weather: The sorrow of the Bay: Cyclone Hotbed Bay of Bengal Continues to Drive Storms Towards India, Bangladesh

Shrinkage of East Kolkata Wetlands and its Effect

Scroll : A new study on East Kolkata Wetlands’ carbon-absorption abilities is a wake-up call for conservation

Images used under Google Fair Use Policy. We do not own any of the images.

EIA 2020 : An undemocratic amendment to rape our Mother

Updates of the Dibang Valley Bacaho Andolan | The way forward

Uranium Mining in the Second largest Tiger Reserve in India | Where are we headed?